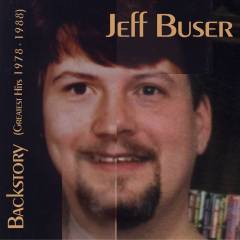 Click here to see a creepier, early version of the album cover.

The "Greatest Hits" subtitle is a bit tongue-in-cheek; none of these songs have been previously recorded, and most have never been performed live.

Stylistically and technically, these songs are as close as I can make them to how they would have sounded if I had recorded them at the time they were written.

I have attempted in all cases to remain faithful to my original conception. If some of these songs sound a bit dated, then I have succeeded.

Add this CD to my cart (PayPal).

Or, buy it now with Google Checkout!

NOTE: To enhance the experience for broadband users, some MP3s are being
converted to high-bandwidth versions. Where this is the case, a low-bandwidth
alternative will always be provided to support users with dial-up connections.
The highest quality, full stereo versions are still available on CD only.


All music and lyrics by Jeff Buser except:

Lyrics on Track 2 by Jeff Buser and Paul Rexrode
Portions of the lyrics on Track 7 taken from Genesis 11:6-8
Track 12 - Lyrics and music by John Denver.

All instrumental performances and vocals by Jeff Buser, except lead guitar on track 5 by Tim Wilhelm.

Recorded between June 2002 and November 2002 at Meadowview Studios in Philadelphia, PA and Foxwood Studios in Short Gap, WV.

Songs were converted to MP3 for this web site using Cakewalk Pyro 2003.

The Wahl trimmer previously mentioned on this site recently died after many years of faithful service.